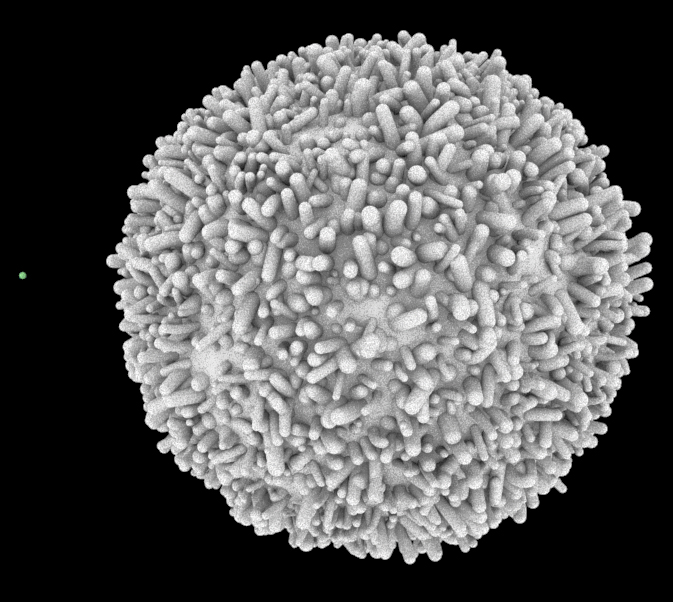 The small green dot to the left of the T cell is a HIV particle, shown to scale

Like other viruses, HIV infects host cells with the goal of producing more viruses. HIV targets cells of the immune system, and in particular, T-cells, which are a type of white blood cell. During the first stage of the HIV life cycle, a virus enters the body and then identifies a host T-cell through interactions between receptor proteins (called CD4) on the T-cell surface and viral envelope proteins (Env) on the surface of the viral membrane. A second T-cell surface protein, called a coreceptor (specifically, CCR5 or CXCR4), also binds to Env proteins, triggering major shape changes in Env and leading to the fusion of the viral and host cell membranes. Subsequently, the conical HIV capsid, which contains two copies of the viral genome as single-stranded RNAs, is deposited into the host cell. Soon after the HIV capsid enters, the viral RNA genome begins to be copied into double-stranded DNA, a process known as reverse transcription. Reverse transcription is carried out by a viral protein called reverse transcriptase (RT), using host tRNAs to help prime the reaction and dNTPs to build new DNA strands. Meanwhile, the HIV capsid is transported to the nucleus through interactions with microtubule-based motor proteins.

HIV is a retrovirus, and one of the characteristics of this type of virus is the integration of their genome into that of the host. Integration is carried out by a viral protein called integrase. Once inside the nucleus, reverse transcription is completed. The capsid shell breaks apart, releasing the double-stranded DNA copy of the HIV genome. Integrase then binds and cuts a segment of nearby host DNA and inserts the viral DNA At this site. In some cells, viral proteins start being produced soon after integration, while in other cells, the viral DNA lies dormant for days, months, or even years. When the viral DNA becomes activated (or the viral DNA is transcribed), it serves as the blueprint to transform the cell into a viral factory. While some viral RNAs go on to ribosomes to be read and direct the production of viral proteins, other viral RNAs are shuttled to the plasma membrane, where they are packaged into new virions.

Once the different viral components are built by the infected cell, they must be assembled and released at the plasma membrane. These components include two identical copies of the RNA genome, tRNAs from the host cell, and many copies of Env protein (which is embedded in the plasma membrane), Gag polyprotein, viral protease, RTs, and integrases.

The formation of a new HIV virus consists of three major stages:

2) Budding and Release. Packing of Gag polyproteins causes the plasma membrane to start to bulge out, eventually forming a spherical particle that resembles a lollipop. At this point, proteins known as ESCRTs are recruited and cut the plasma membrane “neck,” releasing the virus from the cell.

3) Maturation. The Gag polyprotein is basically multiple different viral proteins connected by short linkers. During maturation, Gag polyprotein is cut and separated, a process carried out by HIV protease. This results in the release of matrix protein (MA), which binds to the cell membrane and is responsible for recruiting viral Env protein to the budding site, capsid protein (CA), which forms the conical capsid shell, nucleocapsid protein (NC), which binds and condenses the viral RNA genome, and p6 proteins, which plays a role in viral budding. During maturation, CA proteins form a conical shell around the HIV genome.

How does HIV infection occur? The following molecular animation depicts the process of how HIV infects a T cell and transforms the cell into a viral factory.

Please note that the animation shown here is a work-in-progress, and will be further updated, refined and augmented over the coming years.  Additional animations will illustrate how antiretroviral drugs impact the life cycle, and how innate immunity can block HIV infection.

Click here to view a version of this animation without narration.

To combat viral infections, the mammalian immune system has developed many defenses against it, some of which works against HIV and other retroviruses, targeting different aspects of their life cycle, restricting their replication. The following restriction factors are some of the most well-studied examples.

APOBEC3G (A3G) is a protein that is produced by the host cell and is packaged into budding viruses. After these viruses infect a new host cell, A3G produces a large number of changes in the HIV genome, which causes the virus to become non-infectious due to catastrophic errors in its genetic sequence. This process is shown in the animation on the left.

As shown in the animation above, HIV counteracts A3G restriction by encoding a protein called viral infectivity factor (Vif). Vif hijacks the host’s molecular machinery and uses it to destroy A3G, preventing A3G from being packaged into new HIV virions.

The tripartite-motif protein (TRIM5) proteins are restriction factors that block retroviral infections by binding to viral capsids soon after entry into the host cell and preventing reverse transcription.

TRIM5 is a mammalian restriction factor that can potently block viral replication. It is part of the innate immune system. TRIM5α (colored purple) can bind to the HIV capsid shell (yellow) that coats and protects the viral genome. Structural studies have shown that TRIM5 can form a cage-like structure surrounding the capsid. There are three proposed mechanisms by which TRIM5 can inhibit HIV infection: 1) causing premature uncoating of the viral capsid, 2) recruiting ubiquitin, which leads to non-productive uncoating of the virus, 3) virophagy in which the TRIM5 cage directs the viral capsid to get degraded by digested enzymes contained in a membrane structure called lysosome.